The Evil Wiki
Register
Don't have an account?
Sign In
Advertisement
in: Villainous Tools and Other Items, War-Machines, Technology,
and 2 more

The War of the Worlds

Unspecified planet (the 2005 incarnation of War of the Worlds only)

To eradicate any lifeform on any planet.

Tripods are giant bio-mechanical war machines featured in from H.G. Wells' 1897 sci-fi novel The War of the Worlds (and its adaptions). They programmed to exterminate the human race and cause astronomical destruction to Earth. Though there are several different incarnations of the infamous tripods, all stories follow the same story. The tripods arrive on Earth, cause destruction, are almost undefeated by the military, and are eventually killed by Earth's viruses.

They are war-machines that are used by aliens, the main antagonists in the War of the Worlds franchise and appear in almost all incarnations of the invasion of our planet, and are as well treated as popular culture icons of our world's destruction and conquest.

The Martian war-machines make their first appearance in cinema in the 1935 movie The War of the Worlds, based off the novel with the same name. Instead of containing their usual huge, crab-like appearance as in the books, they are large manta ray-like spaceships with slender yet invisible walking appendages. Armies of these robotic beasts arrive on Earth via a meteorite strike. Despite wielding their greatest powers, skills, and training, the recently arriving US Marines could never even put a stop to their rampant massacre. They even drop an atomic bomb on the invaders, but there is no effect due to the machines' impenetrable shieldings. All hope is lost, as Earth is almost forced into evacuation until it is revealed that the tripods and Martians are dying. Not because of waves of heavy war fire, but because of the spread of Earth's deadly viruses that infects, cripples, and kills Earth's now unsuccessful invaders.

The serialized War of the Worlds (1988–89) television series was established as a sequel to the 1953 film with many of the alien technology in the first season cued with visual references to the design of those in the aforementioned film.

While almost never using fighting machines in general, the series does reveal in one episode that these same aliens (from Mor-Tax; not Mars) did at one point use tripod machines in their past before evolving into the floating machines as seen in the film. This "older model" resembles the latter machines with only a few noticeable differences.

Aside from the legs, there is no visible mounted heat-ray, however, where the latter models have a green window along its front edge, the fighting machines have an orange/red colored window (framed in blue circle) coupled with its pulsating glow, suggesting a cruder version of their heat-ray built into the body of the machine. Whether it is a heat-ray or other weapon this model possesses is unknown. While the new models are reminiscent of a swan, these tripods seem more inspired by an insect, both in its (briefly seen) movement, as well as the sound it emits. The TV series also gives insight into the machines, referred to both by humans and aliens alike as ships. In "The Resurrection" the interior of the machines are seen to be lit by cold colors of blue and black (with only a sliver of neon green). The machines have an on-board computer that the aliens can communicate with even when distanced by location and time, and even with relatively primitive equipment.

When asked how the aliens make the machines fly, Dr. Blackwood refers to Dr. Forrester's unconfirmed speculation that they are able to use brainwave impulses. This is given credibility when three aliens later take possession of the tripod. From inside, it can be seen that there is no obvious physical means of operation; instead, the three are simply seated back-to-back, a formation seen quite commonly among the aliens throughout the season, frequently in a state of some type of shared mental exercise (though what this practice is exactly is never detailed in the series). A similar seating construction appears to be present in the later machines with the device clearly identified as the computer placed in the center.

Information given in the show also suggests that deflector shields were not used until the 1953 invasion, after a recon mission proved that humanity had the means of effectively damaging their machines. The limited strength of their unprotected warships is also suggested by the fact that two or more of them were downed by a militia of no more than just 38 men. Curiously, a late episode features a mysterious Martian pod found that is made of an element that is, by all accounts, virtually indestructible. The pod in question appears to have to no weaponry and can only seat a single alien. Its purpose is not given, leaving its connection to the invasion and the aliens' technological progress unknown.

The movie opens up with Ray Ferrier, a divorced crane operator, investigating a mysterious series of violent lightning strikes knifing into the ground. When he arrives at ground zero, he sees that the lightning strikes spawned holes, and what rise from the holes are heat-ray armed, one hundred foot tall tripods ready to cause genocide. The machines then wreak havoc upon Earth, blasting anything in their way and harvesting humans for their tissue, flesh, and blood.

Not even the National Guard armed with families of tanks and fighter jets could stop the tripods, as they gun down any and all types of military support. It is then revealed that their invulnerability is from their force fields, but Ray eventually destroys the beasts with a group of unpinned grenades. The remaining tripods are killed ironically by simple diseases that wouldn't really harm a human due to the fact they don't have experience or the medicine for it. After all of the invaders or wiped out by diseases or wounds, the Earth is saved and everything returns to normal.

Tripod's version in the film was different compared with the novel incarnation. They do not possess the novel's killing chemical black smoke and are equipped with some type of invisible force shield that only becomes visible when struck by Earth weapons; no conventional human weapons can penetrate them (an obvious reference to George Pal's original 1953 film). They are armed with two heat-ray-like weapons that incinerate humans to ash, leaving the victim's clothing behind while destroying and burning everything else; this caused confusion for some viewers and also among critics. It has been suggested that the aliens' heat-ray only destroys "organic" matter, but this does not fully explain the destruction of buildings and vehicles, nor the untouched cotton and wool of clothes, both of which are organic. Another offered explanation is that the heat-ray is a high energy coherent emission of microwaves similar to a Maser that causes the water in the human body to superheat into very high temperature steam, which then causes the victim to explode into ash as it instantly expands; this would also account for the metal objects it hits catching fire as they heat up, like metal objects placed in an activated microwave oven. The lethality of the fighting machines can be summed up in a phrase spoken in the film (a paraphrase of a line from the 1953 Pal film): "Once the tripods start to move, no more news comes out of that area."

The three-legged war machines, ever since their first appearance, have become stamps and mascots of alien invaders, rivaling that of even the Xenomorphs. As such, they have been referenced and parodied in other pieces of media several times, like in Chicken Little. They were also seen in Scary Movie 4 as they attacked Earth's inhabitants and vaporized everything and everyone with their lasers. 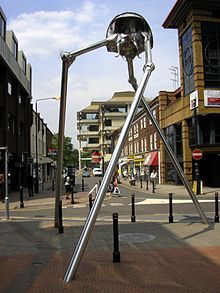 A statue of the iconic walkers in Woking, Surrey. 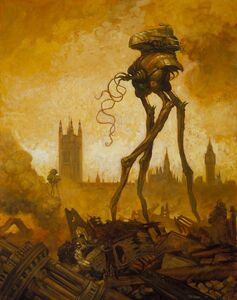 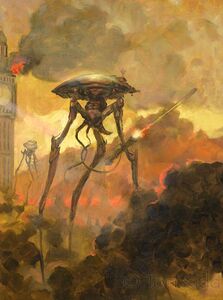 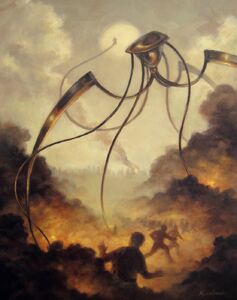 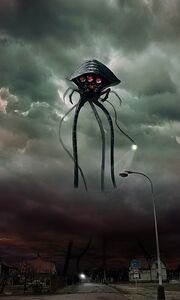 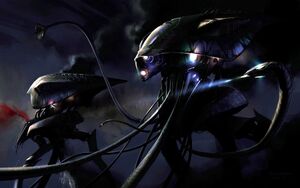 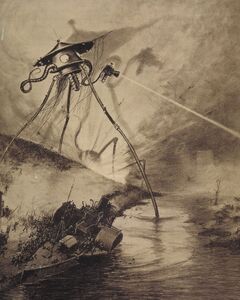 One of the Tripods as illustrated in the 1906 French edition of H.G. Wells' The War of the Worlds. 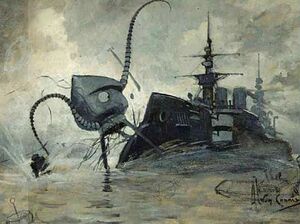 One of the Fighting Machines as illustrated in the 1906 Brazilian edition of The War of the Worlds.
Community content is available under CC-BY-SA unless otherwise noted.
Advertisement