The Tropical Resort is a extravagent, tropical paradise-themed park that is one of the most exotic atttraction areas of Dr. Eggman's Incredible Interstellar Amusement Park and the first zone in Sonic Colors. It serves as the hotel element of Doctor Eggman's intergalactic theme park as well as Sonic and Tails' starting point.

It uses beautiful scenery to captivate the player, being right in the middle of a breath-taking view of planet Earth, the stars, and space. While the player blazes through the theme park at Mach 5 speeds, it is also a great place to get some interstellar shopping done. There is also a boss encountered in Tropical Resort, Eggman's 2 evil machines named Rotatatron (Wii version only) and Globotron (Nintendo DS version only).

Before any opening cinematic or even asking for player data, the game throws the player straight into Tropical Resort Act One. This introduces the player to the basic controls of the game, such as jumping, grinding, the Homing Attack and the Sonic Boost. Despite being an introductory stage, there are many areas in this act for the player to explore once he or she unlocks the Cyan and Yellow Wisps later in the game.

Tropical Resort Act Two is an extension of the previous act, this time focusing primarily on 2D sections and introducing the player to slower platforming and objects such as fans that will propel Sonic vertically to reach rings, platforms, and Wisp Capsules. Right before the end of the stage, there is a hill lined with Egg Pawns scattered in a zigzag pattern along with mirrors that Sonic can ricochet off of using the Cyan Wisp to knock all of them out in succession. The act ends with a giant Wisp Capsule for Sonic to break open.

Tropical Resort Act Three introduces the player to the Quick Step. In the latter part of the act, there is an area full of boxes that Sonic can break through using the Stomp attack. ﻿

Tropical Resort Act Four is a short 2D act. Despite its size, collecting all of the Red Rings in this act requires a bit of exploration, and two of them can only be reached by using the Purple Wisp, which isn't unlocked until much later in the game. ﻿

Tropical Resort Act Six is a short 2D act, similar to the previous two acts. This act introduces rotating platforms and platforms activated by switches. There is also a sealed-off section near the end of the Act that requires the Pink Wisp to access. This is one of the few stages that Super Sonic cannot be played in due to lack of enough Rings in the upper section. 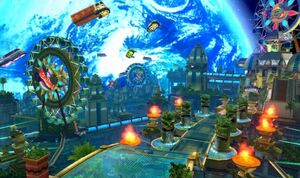 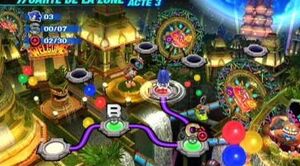 An area map of the Tropical Resort zone.

An artwork of the Tropical Resort zone. 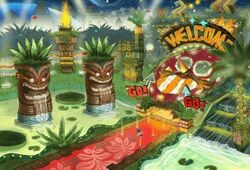 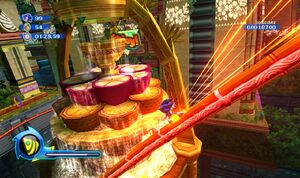 The Tropical Resort park as seen in the Wii version of Sonic Colors. 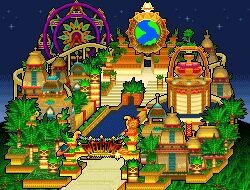 The Tropical Resort park as seen in the Nintendo DS version of Sonic Colors. 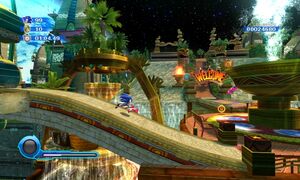 One of the fabulous courtyards of the Tropical Resort fit for guests, customers and tourists. 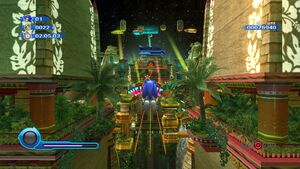 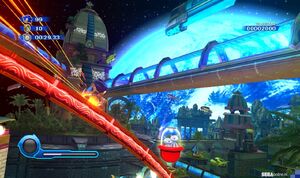 Outside the temple-like hotels of the Tropical Resort park. 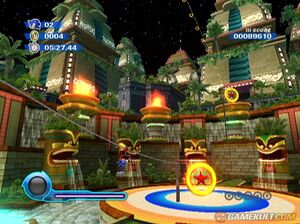 A jungle-like fountain court featured with totem poles inside the Tropical Resort park. 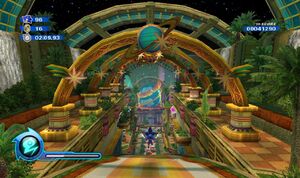 The tropical and hotel-like elements of the Tropical Resort area. 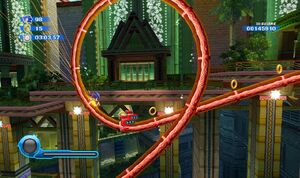 The hotel areas of the Tropical Resort. 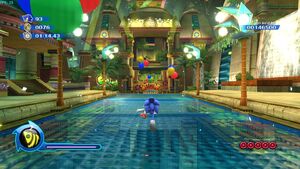 Sonic among many others are "welcomed" to the Tropical Resort.
Add a photo to this gallery

Retrieved from "https://evil.fandom.com/wiki/Tropical_Resort?oldid=63798"
Community content is available under CC-BY-SA unless otherwise noted.