The Ultimate Annihilator was a devastating satellite WMD (weapon of mass destruction) created by Dr. Ivo Robotnik in the year 3235 and it is capable of erasing matter and even warping reality. Built as his ultimate weapon against the Knothole Freedom Fighters and his archenemy Sonic the Hedgehog, it would instead become the means of the mad doctor's own demise.

Although Doctor Robotnik began creating a prototype of the Annihilator during the Great War, its early development was ended when he was sentenced to 10 years in prison for wanting to test the weapon on living Overlanders.

Robotnik had intended on using the device to erase Knothole from existence and thereby defeat the Freedom Fighters once and for all. The weapon was powered by irradiated ore and first tested on an Overlander captured from Mega Central. Its function involved targeting preprogrammed targets and erasing them from existence. As part of this plan, Robotnik collected data on all the inhabitants of Knothole.

Although Robotnik managed to fire the weapon and hit Knothole, his nephew Snively had altered its programming beforehand to not only spare the village (it was instead trapped inside a pocket dimension 3 hours ahead of its original timezone), but to specifically target Robotnik's DNA. Thus, only Robotnik was erased from existence permanently, the weapon overloading due to his presence in its control room, and the rest of Mobius briefly disappearing from reality before returning.

Furthermore, the weapon being fired had after effects, including the unleashing of the Omega Wave that weakened the dimensional barriers with other zones and returning Echidnaopolis to Mobius Prime, as well as allowing the Dark Legion to escape the Twilight Zone. It also restored the free will of the roboticized Mobians, and caused tremendous damage to Verti-Cal and Horizont-Al's zone. 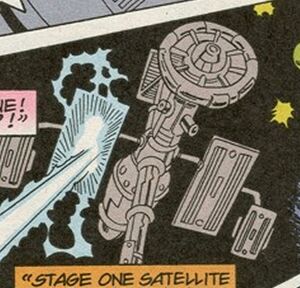 The Ultimate Annihilator
Add a photo to this gallery

Retrieved from "https://evil.fandom.com/wiki/Ultimate_Annihilator_(Sonic)?oldid=116493"
Community content is available under CC-BY-SA unless otherwise noted.