Eons before Pokémon X and Z

To bring any deceased pokemon back to life.

To revive AZ's Floette.
To help Lysandre to destroy all life.

The Ultimate Weapon is a dangerous crystale-like device and an object featured in the Pokémon games. It was used by Team Flare to exterminate all humans and Pokémon alike.

It appears to resemble a crystal flower. The main blaster of the weapon in the shape of a cone-like spire is in the center. Majority of it is clear/white, but the center part is a medium red.

AZ created the device to bring his Floette back to life after she died in the great war. Even though he succeeded the pain in him did not subside so he turned the device into the ultimate weapon.

He used it to end the war by wiping out many lives. When Floette realized that he used life energy from other Pokémon to bring her back to life, she left him.

He went in search of her and took the key to the weapon with him. 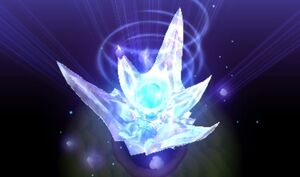 The Ultimate Weapon
Add a photo to this gallery
Retrieved from "https://evil.fandom.com/wiki/Ultimate_Weapon?oldid=77873"
Community content is available under CC-BY-SA unless otherwise noted.