The Uroboros Virus is a highly potent and lethal biological weapon that features prominently in Resident Evil 5 and Resident Evil Revelations 2. Created by former Umbrella Inc. researcher and eugenic terrorist Albert Wesker, Uroboros was created via manipulation of Umbrella's original Progenitor virus and fusing it with other viral strains.

The purpose of Uroboros was to enforce natural selection in the human race; certain select individuals with superior genes would be enhanced by the virus, altered into a superior breed of genetic "supermen" with intellect and powers similar to Wesker himself. All other humans who did not possess the correct genetic makeup would be brutally killed by Uroboros and literally be turned into the virus itself; their bodies consumed by it and transformed into grotesque creatures made of writhing, worm-like black pustules.

Driven by delusions of godhood, Wesker intended to saturate the planet's atmosphere with Uroboros, wiping out most of humanity and ruling over the remainder as the god of a new age. His plan to infect the Earth was thwarted by his old S.T.A.R.S. subordinate and hated rival Chris Redfield, who had managed to destroy all of Wesker's B.O.W.'s and crash the madman's stealth bomber into a volcano. Even after infecting himself with Uroboros, Wesker was defeated and his virus was destroyed.

In its original form, Uroboros was too deadly for any host to support life. Only with the introduction of Jill Valentine's T-Virus antibodies could Uroboros' rapid amplification be controlled so that it left a select percent of the human population alive.

Once Uroboros comes into contact with an organism's cells and infects them, it inserts its genes into the host's genome in an attempt to merge with the host. For those whose genetic sequence is compatible with Uroboros, the merge is successful, bestowing superhuman abilities upon the host. Those whose genomes are incompatable fall to the virus' uncontrolled amplification, and their cells are overtaken by Uroboros. The resulting infected tissues, organized into undifferentiated tentacles, absorbs the body of the host and any other organic matter it can reach. These tentacles are held together by yellow pustule-like organs, which are its only weak-point.

Since no compatible hosts have been seen to live long enough for the full effects to be observed, it is unknown what kind of capabilities they might receive in the course of T-Virus infection. However, due to the fact that it was designed to accept a small percentage of the human population, it could be said to force evolution upon the human race. If Uroboros had been spread across the globe, it would have weeded out those with unsuitable DNA, and selected for genomes compatible with its own genetic material.

Not much else can be said without extrapolating information, since there have been only four hosts seen in the games, three of which were incompatible. Because Wesker's situation, with his preexisting virus and possibly the overdose on PG67A/W, is so unique, it is difficult to say if the symptoms he showed were typical of all compatible hosts, or if they were peculiar to him, though saying Wesker is typical is not the best description (he might have been bonding, but was killed before it completed). It is possible that Uroboros-infected cells, with or without a compatible host, develop a form of sentience, or at least characteristics of an individual organism. The effects shown by Wesker was the abiltily to use electricity with the metal he picked up (although it might be because of friction), and he had increased jumping ability with increased resistance of damage, regeneration, and strength (although he was overdosed with PG67A/W which made him weaker and poisoned from the inside).

The Uroboros Plan was a file written by Albert Wesker and placed aboard the Tanker within the last chapter of Resident Evil 5. It details Wesker's plans for the Uroboros Virus.

The Uroboros Virus will have a direct and substantial impact on the Human DNA. Those who possess inferior genes will find exposure to the virus fatal. Most of those infected will be unable to withstand this winnowing. The handful of survivors will be limited to those who possess superior DNA.

There is no room in this new world for those who do not qualify. A new day will dawn only for the chosen few. Tonight Uroboros and I shall awaken the best of this world.

Everything is on schedule. When the Bomber reaches the tropopause, the Missiles carrying the Uroboros Virus will be deployed.

Once released, the virus will enter the troposphere and spread using the wind currents. It is then that Humanity will recieve it's final judgements. A virus possesses no emotions, and therein lies it's beauty. It will select only choice Humans from around the world. The ones who are not chosen, will become hosts for Uroboros, and their existence will consist only of searching for new hosts.

Once set into motion nothing can stop this chain reaction. The din of six billion screams will close the book on Humanity's ignoble past. 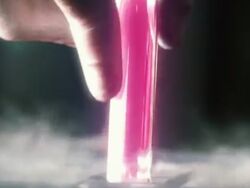 A vial of the Uroboros Virus.

The Uroboros Virus logo found on a missile carrying the said virus.
Add a photo to this gallery

Retrieved from "https://evil.fandom.com/wiki/Uroboros_Virus?oldid=26176"
Community content is available under CC-BY-SA unless otherwise noted.