The Evil Wiki
Register
Don't have an account?
Sign In
Advertisement
in: Villainous Tools and Other Items, Magic, Elementals

During the "Poor Unfortunate Souls" scene in Ariel's Story Studio, Ursula's cauldron acts as a minigame of sorts. Flotsam and Jetsam will instruct the player, in riddles, to put 3 different colored potions into the cauldron. The correct combination will reward the player with scenes from the movie, redubbed by the original actors, with new music as well. The combination will change every occasion, for different scenes. 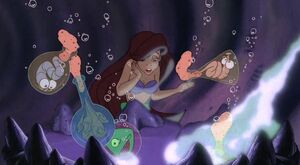