The Evil Wiki
Register
Don't have an account?
Sign In
Advertisement
in: Evil Lairs, Prisons, Magic,
and 2 more

Ursula's Grotto, also known as "Ursula's Fortress", "Ursula's Domain", and "Ursula's Lair", is a dead giant leviathan whose own skeleton and interiors became a cave, and it is home to the flamboyant evil sea witch Ursula.

The Grotto is a skeleton of a gigantic creature long since dead. It's maw is the main entrance, but due to the decay, there are many ways to enter and exit the place.

The main hall is the center of most activity in the lair. In the middle of the room is a large cauldron, kept inside a sort of pit in the ground. There are pink plants hanging from everywhere. Then to the far right of the entrance, is Ursula's mirror and vanity wardrobe, where she pampers herself up with flower lipstick, and her other cosmetics, all kept organized on the individual arms of the mirror frame.

Ursula's conch that acts as Ursula's perch and her "throne". Behind the conch is a small entryway to the back of Ursula's lair. And there are also a few holes in the roof that lead to the outside of the lair. The conch itself is directly ahead of the main entrance, hanging from the ceiling and blocking the entrance to the back corridor. Ursula sits in this area and possibly uses it as a bed at nights. She keeps a clam filled with live shrimp inside, so that she may snack on them whenever she desires to.

And to the left of the entrance, (hanging from the wall) is Ursula's potion cabinet, where she has all sorts of ingredients tucked away for her spells. Most of these are made of various sea creatures, whether alive or dead.

Since after her banishment from King Triton's palace, and consequently Atlantica, the sea witch Ursula along with her pets Flotsam and Jetsam found a new home in a new location just outside King Triton's kingdom. The lair itself is a colossal skeleton of a beast known as The Serpentine. Her new home serves her needs well as she conducts new magic potions and evil spells as well as hatching new schemes of revenge against Triton and her takeover of Atlantica.

It is here that Ariel, one of Kig Triton's beloved seven daughters, came with Flotsam and Jetsam to their mistress' home to accept her offer to be a human adn to walk in the surface world. Ursula began her magic conducting of a spell that would make her human, but it first comes a bargain; Ariel has signed on a contract of Ursula's, saying she will give away her voice. The deal was made: Ursula magically stolen her voice in the form of a glowing yellow orb of energy that was transferred into her necklace and the young mermaid was completely turned into a human but only for 3 days until she finds and obtain true love's kiss to make her transformation permanent. Ariel quickly flees as Ursula laughs from within her grotto.

Her victims regain their merpeople form and escaped after Ursula's death.

In The Little Mermaid comic Serpent Teen, the creature which made the skeleton was once known as The Serpentine. The creature was used by a kingdom of eel-human hybrids known as the Moray as a form of gladitorial entertainment. They would send unsuspecting creatures to the maze where the creature lurked and watch as it fed upon them.

During the events of the comic, Ariel had managed to elude the creature to the point where it was sent into a bloodthirsty rage, which forced the moray to kill it. Then Ursula came along and offered the moray a chance to steal King Triton's trident if they gave her the creature's skeleton.

From that point forth Ursula used it as her lair.

Ursula's Grotto made an appearance in several videogame adaptions of Disney's The Little Mermaid.

Ursula's Grotto made an appearance in Kingdom Hearts and it was once referred to as "The Leviathan". Nothing was changed about the decor of the lair, except for it's missing back corridor. What is interesting to note about the Leviathan is that Ursula's garden is never transformed back into merfolk after Ursula is killed. 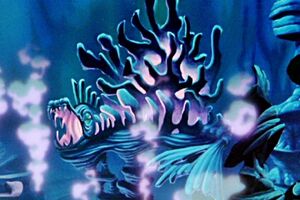 The Leviathan which is the skeleton of the giant beast known as The Serpentine, is also now home to the sea witch Ursula. 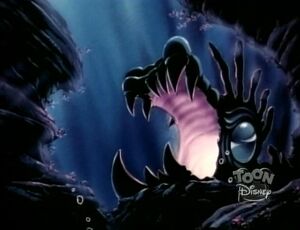 The main entrance to Ursula's Fortress as seen in The Little Mermaid TV series. 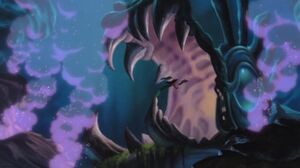 Ariel follows Flotsam and Jetsam to the entrance of their mistress' lair. 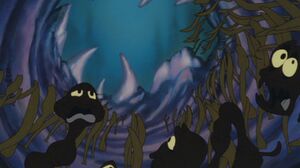 The interior of the entrance to Ursula's Grotto. 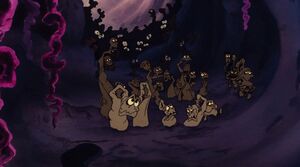 Ursula's Garden found within her Grotto. 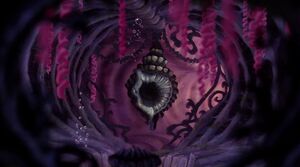 The main hall of Ursula's Grotto. 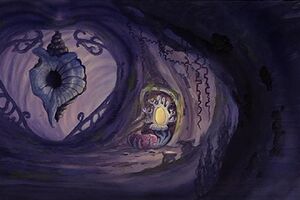 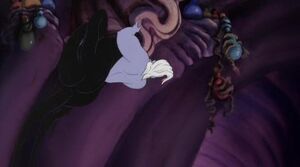 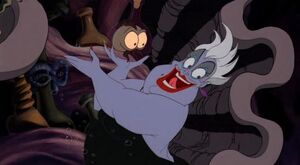 Ursula show potions from her cupboard. 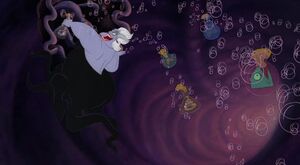 Ursula throws potions off her cupboard. 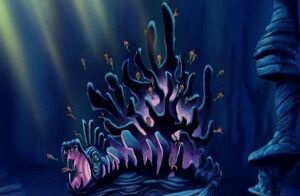 The merpeople who were changed back to normal, escapes from Ursula's Grotto. 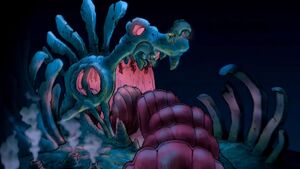 A concept art of Ursula's Lair for Ariel's Undersea Adventure. 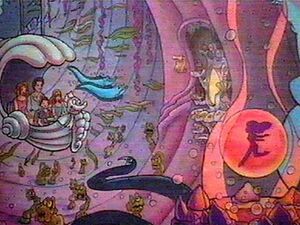 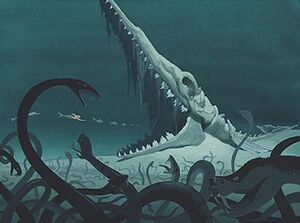 A concept art of Ursula's Lair under the name "The Whale Skeleton", bearing more resemblance to a whale skeleton. 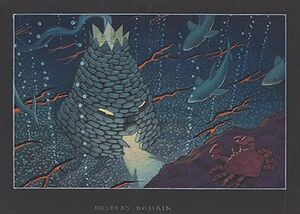 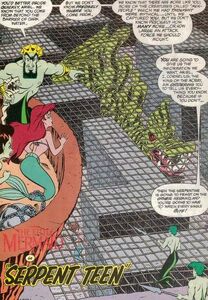 The Serpentine as seen in Serpent Teen of The Little Mermaid comics. 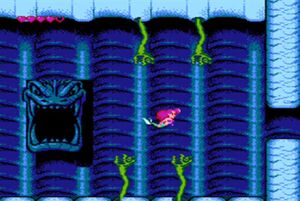 The Polyps who are Ursula's victims as seen within her lair (also called Ursula's Castle) in the NES videogame adaption of The Little Mermaid. 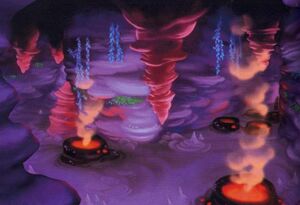 The Den of Tides; the entrance to Ursula's Grotto in Kingdom Hearts. 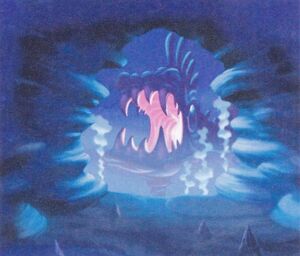 The Tidal Abyss; the final entrance to Ursula's Grotto in Kingdom Hearts. 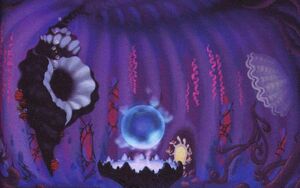 The interiors of Ursula's Lair (Ursula's Grotto) as seen in Kingdom Hearts.