The Evil Wiki
Register
Don't have an account?
Sign In
Advertisement
in: Mature, Villainous Tools and Other Items, Evil Realms,
and 7 more

The "Well to Hell" is a widely spread urban legend about a crew of Russian scientists drilling a hole in Siberia. The drill had reached a feet of about nine miles, and it managed to break through one of the Earth's cavities. Fascinated, the scientists decided to lower a heat resistant microphone into the hole to test plate movement. What they were about to hear would send them into a hysteria. According to the urban legend, the microphone had picked up a noise. That noise was the screaming of untold millions of damned souls in Hell. The scientists then fled from the sight as fast as they could.

Ever since this incident, it was widely spread by many Christians that it was proof that Hell and the afterlife was real, and it convinced countless many that Hell truly was a legitimate place. However, the alleged "Well to Hell" urban legend has been proven countless times by many scientists to be nothing more than a hoax.

The head scientist, Dr. Azzacov, has been proven to simply be a fictional person. While there was mining in Siberia at one time, there are no known documents that prove that he existed, nor that there was a nine mile drilling in Siberia. There's also the fact that the heat from the hole was greatly exaggerated. You may ask yourself that if the drilling never happened, what about the recorded screaming of the damned? Surely this proves that the story is possibly true. Actually, this part in the urban legend isn't true either. What can heard in the recording is actually from a 1972 horror film entitled Baron Blood. The person who recorded the screams from the movie cleverly added more sounds to the original recording and used that counterfeited recording as proof that Hell was a real place and that you may end up there if you don't start making any amends for your life. 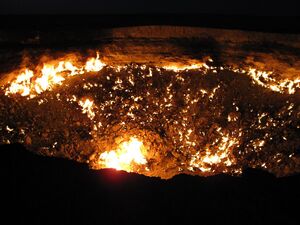 The Well to Hell
Community content is available under CC-BY-SA unless otherwise noted.
Advertisement