Rudolph and Frosty's Christmas in July

Thousands of years ago

Frigiomancy
The Genie of the Ice Scepter and his magic powers

To unleash King Winterbolt's evil magic upon his victims and enemies.

To aid Winterbolt in taking over the North Pole.
To destroy Rudolph the Red Nosed Reindeer and his friends.

Winterbolt's Scepter is a magical scepter that is the signature weapon of the evil snow sorcerer King Winterbolt and an object featured in the animated movie Rudolph and Frosty's Christmas in July.

It is a rod made of solid ice with a fountain-shaped top piece.

Centuries ago, Winterbolt ruled over the North Pole from his Ice Palace. He used his Ice Scepter to torment the inhabitants and drive them away. He had his two Snow Dragons who cause blizzards. Lady Boreal of the aurora borealis appeared and told him to stop his tyranny. Winterbolt, unturned by the warm-hearted mystic's plea, tried to send her away with his scepter, but it was no match for her powers.

Lady Boreal in retaliation put him into a deep sleep which he would remain as long as she lived as a human.

For many years, true to Lady Boreal's words that nothing is forever, Winterbolt slept and in that time Santa Claus was led to the North Pole and set up his workshop there. Sadly, Lady Boreal's time as a human were coming to an end. As a result all of her spells wore off, awaking Winterbolt from his slumber.

The scepter is the source of Winterbolt's power. It is not known when it was made or how he got it. He used it to blast cold ice at his victims. Winterbolt can also use it to levitate beings to come to him as he did to the mean weakling reindeer Scratcher.

A genie lives within the scepter called Genie of the Ice Scepter. Whenever Winterbolt need advice or updates, he summons this frightening ice spirit from his scepter who acts as his soothsayer.

The scepter also appears to contain Winterbolt's life force. It were destroyed, his powers would be gone and he would turn into a tree and die. It also was no match for Lady Boreal's warm and mystical power as she simply deflected it. 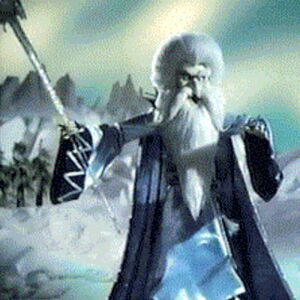 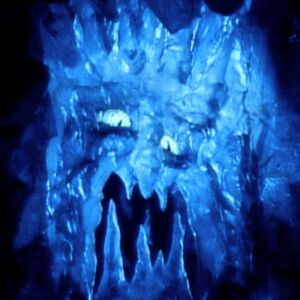 The Genie
Add a photo to this gallery
Retrieved from "https://evil.fandom.com/wiki/Winterbolt%27s_Scepter?oldid=100061"
Community content is available under CC-BY-SA unless otherwise noted.