The Evil Wiki
Register
Don't have an account?
Sign In
in: Villainous Tools and Other Items, Magic, Wrong Hands Tools

The Witch's Cauldron is a popular device found in folklore, fantasy and cartoons - it is said to be one of the most important tools of witchcraft alongside the Witch's Broom, the Spell Book and (in fantasy settings) the Magic Wand.

The Witch's Cauldron is depicted as a large pot, often black and bubbling with evil power as the witch (or coven) stirs what is commonly known as a "Witch's Brew" - popular imagination envisions this "brew" as causing clouds of evil smoke to rise around the Cauldron and often his brew is the basis of the witch's wicked spells.

Cauldrons have largely fallen out of use in the developed world as mere cooking tools. While still used for practical purposes, a more common association in Western culture is the cauldron's use in witchcraft—a cliché popularized by various works of fiction, such as William Shakespeare's classic play Macbeth.

In fiction, witches often prepare their potions in a cauldron.

Also, in Irish folklore, and later in the Leprechaun horror comedy movie franchise, a cauldron is purported to be where leprechauns (including the fictional Irish elven fiend Lubdan) keep their gold and treasures which is said to be found by a lighting stream of rainbow, hence referred to as a "pot of gold".

Despite its popularity, the Witch's Cauldron is almost entirely a fictional concept that goes along with the "wicked witch" stereotype - though it may well of been inspired by pagan rituals or alternative medicine from days gone by. 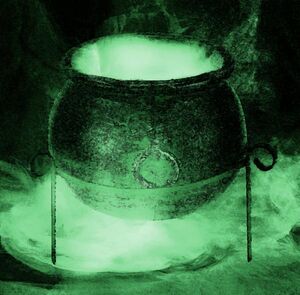 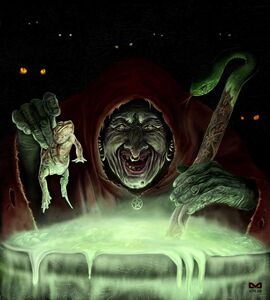 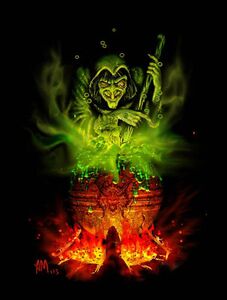 The Witch's Brew
Community content is available under CC-BY-SA unless otherwise noted.