The Evil Wiki
Register
Don't have an account?
Sign In
Advertisement
in: Villainous Events, Magic, Folkloric Villainy,
and 5 more

To serve as the hour of occult practices and ghostly happenings.

The Witching Hour is a concept found in numerous world folklore and occult practices, as well as popular fiction, considered by many to be the hour(s) between 12am and 1am - this is the time in which magic (especially black magic) is at its strongest and the time when malicious magic-users such as witches, beldams, warlocks and cultists perform their rituals and blasphemies.

The Witching Hour is related to the Devil's Hour but has not gained quite the same notoriety in terms of internet culture and memes, however it is still a very prominent part of world folklore and magic, though no evidence exists of cults actually actively performing rituals during these hours a popular myth remains of Witchcraft Cults, especially in Europe.

The purpose of the Witching Hour is not the only thing up for debate, the timing of it is as well. 3am is commonly the accepted time, but some people consider the start of a new day, or midnight, to be the true Witching Hour. Aside from the obvious issues with time zones (even some people asked "Does The Devil just hit ‘em each one by one?"), the argument over timing is a divisive one. The predominant reasoning lies within religious Judeo-Christian texts: Jesus Christ of Nazareth was crucified at 3PM, and the inverse of that would be 3AM, making it an hour of demonic activity, according to folklore.

The phrase “Witching Hour” was first recorded sometime around the 1835 A.D., though the origins seem to be from a period of time in the year 1535 A.D. where the Catholic Church forbade activities during the 3-4AM window due to rising concerns about witchcraft in Europe. Witch hunts, demonic activity, exorcisms, and rituals have all become intertwined with the Witching Hour, as just about any clock in a horror movie will tell you.

The number 3 is often a mockery of the Holy Trinity, making it the perfect time to carry out acts of evil, but one ask "is there something else afoot at 3am?". 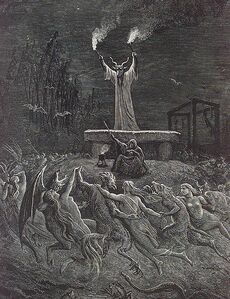 The Witching Hour as described or illustrated in medieval art.