World Castle is a gigantic lava-covered realm placed in the evil king Bowser's Castle and it is the 7th Story Mode world of Super Mario 3D World.

It is this Koopa Kingdom-styled region that sits above every preceding world, but below Bowser's grand utopia called World Bowser, with ? Blocks and Coins are scattered throughout the map. It contains seven standard courses, three Enemy Blockades, a Toad House, a Captain Toad course, a Castle, and a Sprixie House.

After completing the castle's courses, Bowser will kidnap the Sprixie Princesses and will create a sparkling Clear Pipe to World Bowser. 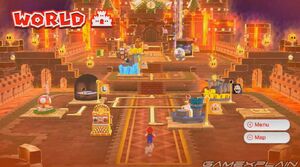 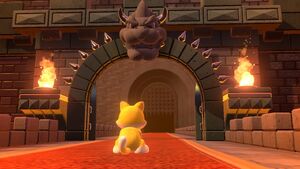 World Castle
Add a photo to this gallery

Retrieved from "https://evil.fandom.com/wiki/World_Castle?oldid=98743"
Community content is available under CC-BY-SA unless otherwise noted.