The Evil Wiki
Register
Don't have an account?
Sign In
Advertisement
in: Mature, Villainous Tools and Other Items, Weapons,
and 8 more

To prevent Earl Gundy's prophecized defeat at the end of Armageddon by destroying Jesus Christ.

The XGLTLGL laser beam, now renamed as the "You-Know-Who Buster", is a very powerful laser cannon used as an ultimate secret weapon by Earl Gundy and it is featured in the 2013 apocalyptic, supernatural fantasy-comedy movie Rapture-Palooza (also known as Ecstasy).

The XGLTLGL machine made of titanium steel and equipment with a targeting computer system possesses awesome firepower with a laser that can blast at any target either on ground or in the air and the energy ray (suspiciously of supernatural origin) from the cannon would leave the intended target fallen, immobilized, dead and burnt to crisp.

The You-Know Who was designed and developed at some unknown point in the 2010s before the Rapture came and went, but by who created it remains an enigma. This does not matter to the new King of Terror Earl Gundy (now known by all as The Beast) who, according to him, says that a very few people on Earth knew about this mysterious device whether these individuals are either on The Devil's payroll to informed him of the weapon's schematics and workings while working for him or simply killed by Gundy's followers should they present a threat to him because of the prophecy of his defeat at the hands of Jesus Christ on God's behalf during the final battle between the forces of good and the forces of evil.

While on a "tour" around the Gundy mansion situated in Seattle, Washington, the Beast showed Ben House's girlfriend Lindsey Lewis the You-Know-Who Buster at the manor's swimming pool area in the backyard by demonstrating its deadly firepower and revealing his dangerous plan for it, before giving the poor virgin girl 8 hours to accept his proposal of either becoming his bride and bearing his own unholy progeny with many evil children to rule the mortal world (in spite of his only son Little Beast born from an impure union), or being forced to witness him killing everyone she has known and loved including her boyfriend and his father Mr. Walt House.

8 hours later, after luring away the Beastly Guards and their leader Morgan away from the Gundy residence with the help of undead neighbor Mr. Murphy and distracting the Wraiths with marijuana due to the efforts of Lindsey's brother Clark Lewis and his fellow pot-smoking buddy Fry, Ben and Lindsey were unfortunately left to desperate measures with their plan intended to cage him for a thousand years did not go well as they hoped after shooting him; they constantly shot him and later knocked him out with a shovel but to no avail considering the fact upon death the unconscious Earl Gundy would rise from the grave and forever truely become Satan incarnate and only the 2 spiritual beings who can kill are Jesus and God. Ben turned to the You-Know-Who Buster and tries to aim it at the Beast before accidentally shoot the laser at an incoming unknown figure, a robed man on a shimmering white house emerging in the sky. And unfortunately for both Ben and Lindsey in their part in all this unusual apocalypse, the figure revealed to Christ who was trying to vanquish the Beast and end Armageddon. This led to the physical human manifestation, and frustrating disappointment of God whose "rather detailed and specific" plan involving the final chapter of human existence was ruined as he blames and disrespects the 2 young lovers for the death of His Son, and somehow later because of their role, led to the deaths of Himself and Satan (reincarnated as Earl Gundy) via electrocution in Gundy's jacuzzi.

The XGLTLGL, better known as the You-Know-Who Buster. 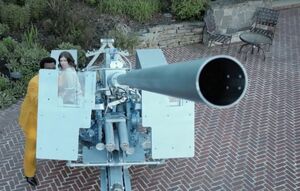 The XGLTLGL laser cannon accidently fired by both Ben House and Lindsey Lewis.

The You-Know-Who Buster demonstrates its awesome and deadly firepower. 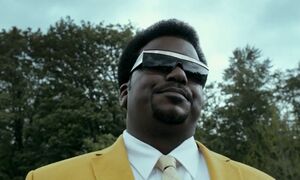