Zelda's Lair is a creepy mountain home to the evil sorceress Zelda and a location in the 1998 animated fantasy direct-to-video feature The Swan Princess III: The Mystery of the Enchanted Treasure.

The lair itself is a hollow cavern found within a mountain. Inside it lies Zelda's secret lab among the cave's huge crystals and rocks used for brewing potions and performing magical experiments.

Zelda casts magical sentient fireball called a Seeker to find Odette, while Whizzer is sent to Derek with a ransom note. The seeker successfully brings Odette, along with Jean-Bob as a stowaway, to Zelda's lair. Elsewhere, Derek receives the ransom note and retrieves the final Forbidden Arts note from where he had hidden it in the library. Whizzer is captured by Speed and Puffin, who convince him to help them stop Zelda. Whizzer eventually agrees and the group heads out to help Derek to rescue Odette.

Back at Zelda's Lair, Jean-Bob frees Odette, she attempts to sneak off with the notes only to be caught again. Zelda, now successfully absorbed the Power to Create and the Power to Change, then transforms Odette into a swan, and imprisons her and Jean-Bob in a dome of green fire that would destroy her if she tried to escape upon mere contact. When Derek arrives at the meeting to pay Zelda the ransom, he is tricked into handing over the final note to her while disguised as Odette and giving her full mastery of the Forbidden Arts. Derek, along with the group, managed to find Zelda's lair and free Odette and Jean-Bob as Zelda was absorbing the Power to Destroy. Derek and the others face her in battle. In the fight that ensues, she conjures up a killing Seeker and casts it at Odette. Odette, with Puffin following her, flies away from the lair in an attempt to escape. Whizzer distracts Zelda by imitating Rothbart's voice, allowing Derek to snap her wand in two. Zelda falls back onto her own fire dome and was killed. Puffin arrives to inform Derek that Odette was killed by the seeker. Derek is heartbroken, regretting that he had not destroyed the Forbidden Arts notes earlier. He burns the notes, and the flames take on the shape of a swan, from which Odette materializes, having returned to life. 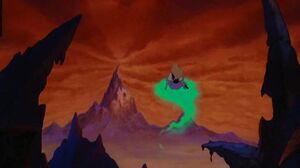 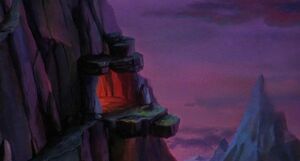 Retrieved from "https://evil.fandom.com/wiki/Zelda%27s_Lair?oldid=115196"
Community content is available under CC-BY-SA unless otherwise noted.