The Zombot Aerostatic Gondola is one of the inventions created by Dr. Zomboss in Plants vs. Zombies 2. It is used by him to fight the players in Lost City, Modern Day, and Arena.

The Zombot Aerostatic Gondola was first introduced in Lost City - Day 32 as the boss of the level. The players had to use Bonk Choys, Red Stingers, A. K. E. E.s, Endurians, and Stallias to fight Dr. Zomboss with the Zombot. After Zomboss was defeated, the gondola exploded, and the balloon covered both him and nearly the entire engine. When he teleported away, the players earn a Lost City trophy (a money bag when replayed) as a reward.

In Modern Day - Day 34, after the game picked the Lost City boss fight, Dr. Zomboss resent the Zombot Aerostatic Gondola on the battlefield. Dr. Zomboss used all the same attacks from the previous boss fight. The players had to use Neon Mixtape Tour plants (Phat Beets, Celery Stalkers, Garlics, and Spore-shrooms) to fight him. After Zomboss was defeated, the players and Crazy Dave earned a waffle taco (a money bag when replayed) as a reward.

The Zombot Aerostatic Gondola returned in Arena as a boss in Enlighten-mint's Boss Fight Tournament with infinite health. After it was defeated in each phase, the Players earned 10000 points.

The Zombot Aerostatic Gondola returned in Plants vs. Zombies Heroes is a Science Pirate Zombie card of Sneaky class. It costs 6, with its rarity is Colossal - Legendary, and its trait is Amphibious. Its strength and health are 5 and 6 respectively. Instead of Dr. Zomboss, the Imp Pilot uses it. When attack, he drops a bag of sand that explodes and deals with damages to plants. If he hurts the Plant Hero, he drops a random zombie and moves to another lane.

The Zombot Aerostatic Gondola is a combination of a gondola and a hot air balloon. The balloon can be seen hand-sewed, due to the presence of the patches. Below it is a heater, which is used to help the pilot travel from lane to lane. Some ropes used to connect the balloon with the gondola.

On the gondola, there is a golden head of a basic zombie, with three bags, a set of gears, and a fin. Also, there are some vines can be seen on the Zombot.

Dr. Zomboss can be seen wearing a brown jacket, with a pair of dark brown gloves, and yellow goggles.

Doctor Zomboss pulls a lever that opens a trap door to release zombies:

In Plants vs. Zombies Heroes, the Zombot can summon any zombies after the Imp hurts the Plant Hero. 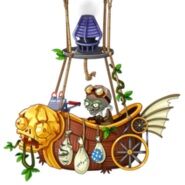 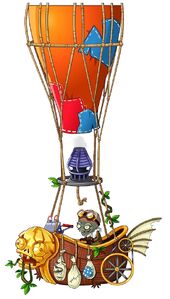 Retrieved from "https://evil.fandom.com/wiki/Zombot_Aerostatic_Gondola?oldid=116454"
Community content is available under CC-BY-SA unless otherwise noted.