Use of the extendable trunk

The Zombot Tuskmaster 10,000 B.C. is one of the inventions created by Dr. Zomboss in Plants vs. Zombies 2. Like the other Zombots, it was used by him to defeat the plants and the Players in Frostbite Caves, Modern Day, and Arena.

The Zombot Tuskmaster 10,000 B.C. was first introduced in Frostbite Caves - Day 30 as a boss. After Dr. Zomboss sent this robot in the battlefield, the players had to use Threepeaters, Hot Potatoes, Pepper-pults, Chard Guards, Rotobagas, and Fire Peashooters to fight him. After the robot was defeated, its engines shut down and exposed. When Dr. Zomboss warped into a portal and teleported away, the players earned a Frostbite Cave trophy (a money bag when replayed) as a reward.

Zombot Tuskmaster 10r,000 B.C. also returned in Modern Day - Day 34 when the game picked the Frostbite Caves boss fight. Dr. Zomboss resent this robot on the battlefield, the players had to use Hot Potatoes, Fire Peashooters, Red Stingers, A. K. E. E.s, Endurians, and Stallia to fight this boss. After Zomboss was defeated, the players earned a Waffle Taco (a money bag when replayed) as a reward.

In Pyre Vine's tournament, Zombot Tuskmaster 10,000 B.C. appeared as the boss with infinite health. After it was defeated in each phase, the Players earned 10000 points.

The Zombot Tuskmaster 10,000 B.C. takes the form of a mammoth, with a brown fur. It has an extendable trunk, with two tusks that are connected with a sling. It has white eyes and red pupils. Dr. Zomboss can be seen encased behind the glass on top of its head.

Dr. Zomboss creates ice blocks with the Zombot's extendable trunk, which summon zombies when destroyed. The closer the ice blocks to the players' house, the weaker the summoned zombies. 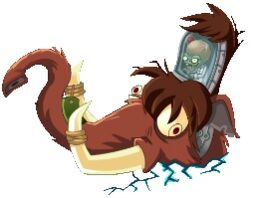 Retrieved from "https://evil.fandom.com/wiki/Zombot_Tuskmaster?oldid=116463"
Community content is available under CC-BY-SA unless otherwise noted.